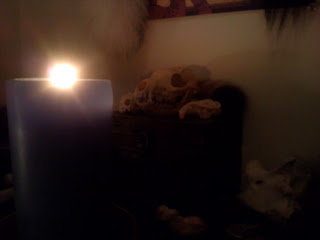 The return of the bad cellphone pictures.

I've tried in vain to write posts for Musings Monday for the past few weeks, but they mostly dissolve into unintelligible wondering about the nature of everything (like everything else I post) so out of the desire to write about something I actually DO know some shit about, I figured why not cover shadow work.

First, no, I do not mean making your shadows work for you. That's kind of an entirely different realm of sorcery I don't feel like getting into right now. None the less.

Shadow Work (Hereby referred to as 'SW') is what I mean when I say you do the hard, behind the scenes messy un-glamorous magic of fixing yourself and working consciously on things you want to fix. Shadow Work is an ongoing process, and it probably will be past the point at which you depart this life. It's also about 95 % psychology and not a lot of spell or wand waving.

SW is kind of a big fucking deal in (my brand of) Shamanism, simply because the old adage of you can't heal others until you heal yourself is absolutely true. Some of you may have read my When Rituals Go To Hell Post. The reason that ritual failed was I was in no position, personally, to be able to lead others on something like that. One might reference the Hierarchy of Needs (Maslow) from psychology which is pictured below. 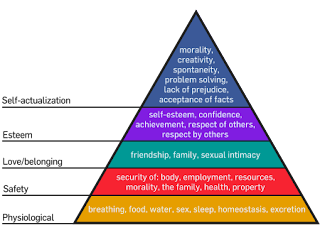 Basically, you can't really think about doing rituals to get close to the 'Divine' when you're starving and you don't really know where your next meal is coming from because you're unemployed in your mundane life. You can try, but your focus is inevitably going to stray because you are not meeting your basic needs, and furthermore Deity would probably understand if you're fucking dying that you can't exactly lead rites for them at that moment.

You might recognize this as the chakra system re-invented. You can't fix chakra issues, usually, from the top down. The Root chakra blockages have to be cleared first before one can move on to more intellectual things. This is where the Shadow Work comes in.

SW is you taking a giant broom to the gnarly innards of your emotional and spiritual self. SW is not the same thing as general cleansing, however. The difference is SW in my practice is much more targeted. You are not clearing outside energies from yourself; you are clearing nasty shit that you yourself have put in your own way that you are consciously aware of and feel the need to change. It's also decidedly more difficult and demands more, psychologically, than cleaning our your auric blocks.

For instance, most of us carry around baggage in the form of energy and mental blocks and emotional shit from past relationships, even if they ended on a good note. Once we have cleared ourselves and our homes of the other person's energy, a lot of times we still end up with blocks. The difference is you're now left with the nasty business of facing yourself and your own mistakes, and letting the person go within your own mind and heart.

We blame ourselves for a lot of shit, as humans. Shadow Work is the difficult, almost insane proposition that we sit down and routinely forgive ourselves and attempt to improve our personalities on a semi-regular basis. It's the process of sitting down and really working through a situation and learning from our mistakes so we don't make them again. It's the process of telling yourself, Hey man, so this totally horrible thing happened and it was our fault, but it's doing us no good pretending it didn't happen, so let's handle it.

Shadow Work doesn't have to be for major things. Some of us walk around with a lot of anger and a tendency to snap, and maybe we want to seek to change that. So we go digging around in our own souls to try and puzzle out why we're so angry with this person, or about that, and then we seek to make our energetic peace with the situation by calling it up on purpose. (Sometimes we have to call up our own demons in order to send them a proper goodbye.)

SW is difficult, and painful, and a lot of times pretty messy. But it's very, very necessary.

Humans like to avoid pain whenever possible. We're hard wired to think that way, so a lot of times our reaction is to bury painful and nasty things and let the emotions die there. Shadow Work means you consciously know there's a fresh scab over that emotional wound you have just sustained, and purposefully ripping the thing off.

Shadow Work asks you to re-live and experience every memory you had of that person, (to stay with the relationship metaphor) to re-live every good day and every bad day. It asks you to remember them, how they felt to you and with you, their smell, the clothes they wore and the places you went together. It asks you to purposefully dig up all of the memories you wish you didn't have anymore, and sit there and just live through them, again and again, until you trigger the release.

Shadow Work is not a mystic process. It's you, with yourself, sitting on the floor and just thinking, feeling, experiencing the past for a moment instead of letting it die. It forces you to give new life and energy to painful, potentially horrible things you would rather never think of again. It's you, sobbing uncontrollably and rocking on the floor with photos from the past everywhere.

But it's beautiful. You find that in the aftermath, after you've stopped shaking or clawing at the floor, something in you is calm now. You don't realize the weight you carry until you seek to release it. Somehow it makes it so much easier than it was before to reconcile with the situation. Shadow Work can take a long time, because once you really begin to dig, to focus on one aspect you want to change, you can find strings of events all linked together screaming for you to release them. It can take minutes or hours. The state one ends up in is rather like a trance state; an ecstatic state born of pain and emotion and loss.

After SW, it's so much easier to leave a situation behind. No, not bury it. It's more of a mutual nod, a tip of the hat, and a parting on equal footing. If you take nothing else from magical practice, at least take shadow work. There is probably no one more valuable thing for a person to do than this.

Shadow Work has a unique inside-out method of transformation. You find you've made your peace on the soul level, and it radiates out from there. Suddenly you don't realize you haven't thought about the person in 3 months. Suddenly you realize you're not angry at your family member anymore. It works slowly, under the radar, so by the time you realize it worked you're moved on entirely.

I will also say I think there is an appropriate time to do Shadow Work for a situation. For me it has consistently been a couple months to a year after the situation. Remember the hierarchy of needs? If your present needs are not being met, you are not stable enough to attempt Shadow working. You have to be fairly stable in your own life and your relationships with others and Spirit to gain from this practice. It takes a strength of character to face your own demons and actually gain from transforming them, and not having that strength immediately is not a weakness. It's just not having the stability yet to do the work. Sometimes you need to be far enough away from a situation to have the perspective to perform the Work without sustaining more emotional damage or becoming stuck in a bad mindset, and one needs to be respectful of themselves in this situation. Be honest with yourself when considering Shadow Work.

So if you want to try this--really think about something you want to change about yourself. Nothing physical like weight loss; shadow work is very intellectual and emotional. Start with something deeper, like anger or assumptions. Then call upon all the memories you have of when you've snapped or been an asshole to people. You might feel embarrassed, ashamed. You may want to stop, but don't. Shadow Work demands you push yourself to the limit and over it, and that's when the break and release happens. When you think you can't take anymore of the memories or else you'll start screaming, you do, and then the self breaks wide open and we become reborn as something better than we were.

Shadow Work is not easy. But by definition it shouldn't be.
Posted by Dusken at 8:44 PM